We had our anthology launch for ‘Ripples’ on the first of December. It was a lovely turn out. So wonderful to meet some of the other contributors and have them sign my copy. It was a bit surreal to be asked to sign copies too, but it was such a fun experience. It was good to feel part of something special too considering it is Rockingham Writing Centre’s first release. :) 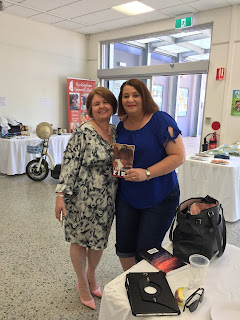 The following day I attended the official book launches of Ms Carolyn Wren for her new book – Love Under Fire, which I reviewed in a previous blog, and Ms Demelza Carlton for her latest release -Blow, which is next on my TBR pile. It was a small gathering due to so many other events being on that day, but what an opportunity to sit and listen to two experienced writers sharing their path to publication and answer our questions. We had our very own masterclass and a captive (and captivated) audience. It was brilliant. :) 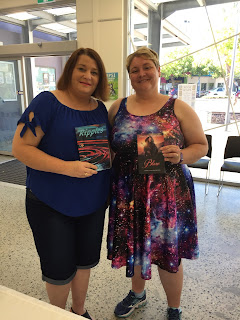 I’d planned to read the next Odd Thomas book, but it’s still packed in a box somewhere. Meanwhile, I had these wonderful stories to read instead. :)

The scum of the galaxy are using Earth as a nuclear winter death camp. It outrages pirate captain Kohia Jekyll’s sense of justice. No one deserves to die agonizingly of radiation poisoning, especially not on the planet humanity had to evacuate seven generations ago. So Kohia intends to close the prison camp down.
She didn’t count on an infuriating shaman healer hitching a ride aboard her starship.

Nairo Bloodstone isn’t going to Earth to be a hero. He learned the hard way that when you’re a healer, doing your best for people is never enough. One miracle leads them to demand another and another. Heroes die exhausted and alone, and the galaxy continues with billions of people still clamouring for a miracle-worker to save them.

No, Nairo isn't going to Earth to be a hero. He intends to change what it means to be human.

Kohia Jekyll is not a captain you want to cross. A space pirate she may be, but her desire for justice is a deeply ingrained part of her psyche. Her loyal crew are ready to follow her perilous rescue mission and she trusts them all, except perhaps the alien from their newly created alliance, and the human shaman healer who makes her inner tiger purr like a kitten – damn the man. His kind of distraction is the last thing she needs.

Nairo Bloodstone has his own agenda for hitching a ride aboard the pirate starship. It has everything to do with his research. He wants to study the pirate captain, learn how the ‘sha’ energy builds around her and others like her. His only goal, to help them reclaim the ability to shapeshift their Earth ancestors once had. It has nothing to do with the woman herself, does it? But when their mission goes horribly wrong, and disastrous secrets are revealed, protocol and research are the last things on their mind.

I loved the inner strengths of the main characters in this story, which were so opposite the ones they showed to everyone else. The action flowed well and continued to up the ante with every chapter. It amused me the way Kohia and Nairo reacted toward each other – two strong characters who thought they didn’t need anyone, yet wouldn’t settle for anything less than the best they had to give, and when it counted, they gave it all. The perfect read while waiting for the next book in the series. :)

Readers describe this book as The Magnificent 7 meets the X-men.

A young woman's family is cut down by a dark god's emissary, forcing her to pick up a gun and sword in defence of all she holds dear. At this time, she is an unknown, little more than a child, but one day everyone would know and fear her. They call her Billie the Kid.

The old gods stir. Their celestial war spills into our world, ending the American Civil War in an inferno that extinguishes life in large parts of the country. Under cloudless skies, legendary characters roam the wastelands while mutants and demons do more than infest people's nightmares. They lurk in the darkness, waiting to spring into action at the whim of their vile masters.

The Sky Fire Chronicles is a fantasy series set in America during the late 1800's.

Life is harsh in the American West. The late nineteenth century is staggering under the weight of an apocalypse, a continuing battle between the old gods who are desperate to reclaim Earth as their own. Young Billie Antrim can’t remember what her world once was. All she sees is desert, desperate times, and danger just a heartbeat away. Yet she remembers a dark stranger who gave her a single silver coin, a token she’s kept secret from her family for almost a decade.

When mutants murder her step father and leave her mother for dead, Billie vows to join the posse with her brother to capture them. The Wild West may be no place for a woman, but Billie isn’t about to take a step back and let the men take charge. They, and the mutants they’re hunting, are about to learn there’s more to this ‘kid’ than meets the eye.

Wow – take what you know about the traditional story of Billy the Kid and push it to the furthest corner of your mind. Then consider a mix of mutants, the supernatural, and an alternative time line that’s completely unexpected. Billie’s path from child to young woman is a perilous one filled with demonic creatures, surprising encounters, and help from an interesting source. It’s this ‘source’ that I found the most intriguing twist when compared with the traditional story’s events. And it’s something I will be keeping in mind as the series progresses. :)

Mr Summerhayes shows a forte for young adult adventures. I think this series will appeal to many readers, not only for the gunfights and battle scenes, but also for the strengths the lead characters possess.

What an amazing collection of stories. There was something to interest every reader in here. Stories on romance, science fiction, memoirs and recollections, suspense, and horror fill its pages. The first story blew me away with its depth of emotion, (I could have done with a ‘needs tissues’ warning.) And the last story filled me with intrigue waiting for the final twist, and it was a good one too. The best part is most of my writing group has a story in the book. :) Very proud of us all. :)

It appears I’m feeling nostalgic this year, so I’m sharing a short story I wrote a few years back.

My copy-editing jobs are done for the year, and our writing group had a wonderful little Christmas party with too much delicious food. We already have our assignments for the first meeting next year and I look forward to another ‘term’ with Romance Writers Australia (RWA) in my ambassadorial role. The goals are coming together. I still want to attempt that script, I’ve finished editing one story and started another, and I have two new stories to write. And I’m sure I’ll find a competition or three along the way.

There’ll be more copy editing to do to keep me out of mischief, but in the meantime, Merry Christmas, and Happy New Year to all who celebrate it. For those who don’t, I hope you enjoy special times and your own celebrations with your loved ones too. And big hugs for those who find this time of year difficult.